THE HISTORY OF BARBOURNE BOWLING CLUB

Derek T. Price has been very kind in allowing us to use excerpts from his publication


Overview Of Bowling and Barbourne Bowling Green Club, Worcester 1897-2008
In this publication he imparts his inside knowledge of the club as not only a member, but also as Secretary, Vice-President and President.
This is an interesting and enlightening read. Copies of the complete publication are available by contacting the club. The complete publication is only £5 +P&P with proceeds generously going to the Worcestershire Air Ambulance and Barbourne Bowling Green Club Charities. 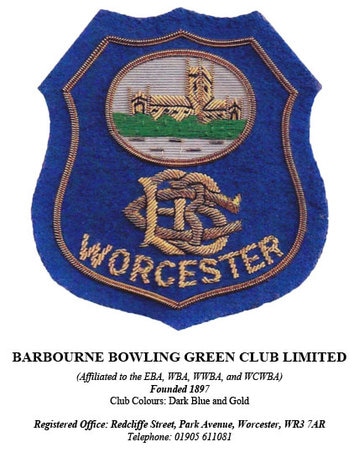 In September 1898, a meeting was held to consider the purchase of 3,200 square yards (2,700 square metres) of ground (0.413 acre), roughly square, having sides of approximately 57 yards (52 metres). The ground was extremely rough. A major part of it was sunken old sand and gravel workings and the rest a refuse site.

The cost of the ground was £200.  The cost to make the green, build the fences, provide a pavilion of minimum convenience, etc. was agreed at £100, making a total outlay of £300.

Legal advice was taken, which suggested a company be formed to protect the security of the shareholders and enable them to partake in the expected increasing value of the shares.

One major concern was formalising the method to be employed in transferring shares. This was agreed, written into the company’s law document by the company’s solicitors and registered with the articles at Companies House.

£150 was to be raised by share issue. Each club member should buy, at least one share (one or two held eight shares), each having a nominal value of  £1 (sterling).  The remaining capital requirement of  £150 was to be raised by mortgage, repayable in principal and interest at 4%.
At a meeting in 1898, the company scheme was adopted and 49 members took shares to the value of £167(i.e. more than one per shareholder). Thus the company was formed, directors elected, Articles & Memorandum of Association drawn up and the share transfer method agreed. One document shows that the nominal share value had increased in two years from £1 to £1 2s. 6d. Shares were traded. It was a money making company for the shareholders, as well as a sport venue. Company papers were deposited at Companies House. An unwritten game rule at the time made a loser pay a fine of 3d. – 1d. for the winner, 1d. for the club, and 1d. to charity.

1938.  A ladies bowls section was formed. They were associated members, unable to buy shares or be nominated forThe ladies opening playing season was in 1939.

1939-45 It is believed that a minimal amount of bowling did take place during the Second World War, with  reduced membership, due to military service and  other war based commitments.

1975 - 1984 the work done by members was limited, due to a drastic fall in membership. It was down to 35 male members and much debate took place about selling the club. A concerted effort to increase membership was undertaken by member Mr. Jack Limerick.

1984 - 1992.  Voluntary work by club members continued in this period. The basic aim was to improve the existing club facilities. This was mainly to clear the rink ditches of weeds, some 2-3 feet tall; to dig out, level and pave a wide pathway round the green; build walls to retain the sloping gardens, and to plant trees at the north end of the club property. In all a tremendous amount of work has been done on a voluntary basis, which emphasises the need for a membership that gives blood, sweat and tears for the good of their club. The management expectancy of minimising club costs by this voluntary work continues, as it did for many years before, and will in the future.

In-fill, by hand, an existing cellar, using wheel barrows to move approximately 40 tons of rubble.  A new concrete floor was laid over this in-fill. Design and construction of a new modern bar, with access to a small cold cellar.

Large, double glazed sliding patio doors were fitted in the northern wall of the club house. This gave access to a raised open patio area of some 10 by 3metres. Its level was about 1 metre above ground level.

Other work included a new men’s changing room, planting of trees, the installation of two 500 gallon water tanks for green watering, earth ditches replaced,  stone retaining walls  to the gardens on the east, north and west sides of the green.

In all clubs the work never stops. Comradeship in doing the work is great but many more members must recognise the need to put their shoulders to the wheel. Members who do volunteer must be given an opening by taking over all or part of the load another member has, thus reducing his or her load and making another member happy. This is critical for club success, for as we all know, many hands make light work.

1997. This was the club’s centenary year. Special events were held to celebrate this. The Mayor of Worcester and other dignitaries attended the Annual Presentation Dinner and a match took place with an English Bowling Association team.

1998-2008. Continued action to improve still further the club facilities. A policy was adopted to donate £200 annually to charity if the annual results showed a surplus of £2,000 or above. In 2000 the underground water supply pipe to the club needed replacement after 100 years of use. The ground bore for the new pipe was done with a compressed air driven “mole” cutting about 100 mm diameter, about 800 mm below path level for approximately 80 metres.
Have you ever tried to move a flag pole about 50 feet long, on a boat trailer meant for carrying four racing sculls, through a city the size of Worcester? Well our gang did. Talk about laughs! But we made it. Like many jobs in a club, where there’s a will, there’s a way. Especially when the flagpole was donated free!

Policy demanded the best green to be created. Thus a new contractor was appointed to guide our team of green workers. This has paid off handsomely.
A conservatory was built, adding space for our social side and for winter short mat bowls.

In 2002 an equal distribution of the total task of providing  teas was derived for  all members, both Ladies and Gentlemen.  It has been highly successful, the club now having a very, very high standard  for home match teas, acknowledged by all. A club skittle team has been formed and entered a local league. So we may have come full circle…

In this period a problem of some magnitude confronted us. In the east side  retaining wall, about 4ft high by 40 yards long,  vertical cracks appeared in about 5 places. If the wall collapsed it was possible that a landslide may occur, affecting the pavement and road levels adjoining our ground.  The cost to put this right would be very high, but we could not risk the possibility of the wall collapsing.

Some months prior to this event we had very long periods of  heavy rainfall. Could this be the reason for an increase in pressure on the wall, together with a reduction in the slide angle of our garden?

We decided to use a consultant for a design and cost and make a claim on our insurers. The knowing people in the club said we did not stand a dogs chance of winning our claim. The insurance  assessor carefully examined our submission, made a visit to the site, and approved the claim!   The case was won and we received £6,000 to do the job in accordance with the consultant’s design. The lesson is, if you believe you are right, have a go and let them prove that you are wrong. Sometimes you are lucky.

Plans are being made for the erection of a much larger men’s changing room, for completion in 2009. To overcome a shortage of volunteers to do the gardening on the east and west sides of the green, which covers a considerable area, a long term solution was planned. This was to remove all existing growth, plastic sheet the whole area and cover with light brown gravel. The gang that did this worked very hard for many weeks. In 2009 the manual effort needed to put things right will still apply.

In 2008 I look at the green, club, gardens and the facilities provided for the members of The Barbourne Bowling Green Club Limited, and it is a very attractive picture.

I then think back 100 years to a number of brave men who saw a derelict area of land, consisting of a sand and gravel pit, with a refuse area at one end, which they thought may well meet their need for the creation of a new bowling club. No doubt over a pint, they decided to have a go. I wish they could see what we have today and I wish I could see what they saw at the beginning. They had the courage to take action and throw negative tittle - tattle to one side. In the 100 years many men of different trades, ages, and abilities have, bit by bit, produced a handsome club of which we are proud.

We think our work in the last 20-30 years has helped to add to the accomplishment of the many members who went before us.

Today I believe that the club warrants a claim to the motto...